Because of its central location and prominent position, nasal bone fractures are the most common bony fractures of the face.  Fractures of the nose can not only result in cosmetic changes, but also lead to functional concerns.  In fact, it is quite common to have permanent obstruction of the nasal passages after sustaining nasal trauma. Figure 1: Schematic of the external nose. The external nose is made up of a pair of nasal bones and lower and lateral cartilages. The nasal septum gives support to the lower two thirds of the nose. Figure 2: Schematic of the internal nose. The nose’s internal structure is divided into a left and right side by the nasal septum. Inferior turbinates function to warm and humidify air as it travels to the lungs.

What happens when I break my nose? Typically, a nasal fracture is associated with a break of the external nasal bones that then results in cosmetic and functional changes. Perhaps something that is not as well understood is that nasal fracture dysfunction can also be associated with injury to other closely related nasal structures. For example, separation or tearing of the nasal cartilages and fracture and deviation of the nasal septum can also cause significant nasal dysfunction and cosmetic alteration.  Additionally, nasal turbinates can swell up and retain their enlarged size after the initial trauma has healed, causing nasal obstruction. Therefore, the resulting cosmetic and functional changes seen in nasal fractures can have contributions from various closely related structures. Figure 4: Artist’s rendition of a normal (top) and fractured (middle) nose are shown from below. The patient suffered nasal trauma that resulted in fracture of the nasal bones, deviation of the septum to the patient’s right, and tearing of the left nasal cartilage (bottom). As a result of his injuries and corresponding functional changes, this patient was unable to breath from his nose.

How do I know if I broke my nose?

Sustaining trauma to the nose is an unpleasant ordeal.  Besides the pain associated with the trauma, you may also experience an acute nosebleed.  This is usually followed by swelling of the nose, black and blue bruises around the eyes, and difficulty breathing through the nose.  All of these could be telltale signs of a nasal fracture.

Surprisingly, a great number of nasal fractures do not initially show a change in the shape of the nose.  This is because the significant amount of swelling can hide the appearance of a crooked nose.  A crooked nose appears days or weeks later once swelling has subsided.

When should I see a doctor?

Timely evaluation is recommended for all cases of nasal trauma and suspected nasal fractures. Aside from bleeding management and fracture evaluation it is important to seek prompt evaluation to rule out potentially dangerous complications such as a septal hematoma. A septal hematoma is a relatively common but potentially dangerous complication of nasal trauma where blood accumulates between the septal cartilage and the lining of the septum.  A physician will drain blood from a hematoma to prevent infection or perforation of the nasal septum. Potential complications from an untreated septal hematoma also include a collapsed nose and breathing difficulties.

What are my options if I break my nose?

Treatment of a nasal fracture is dependent on the extent of the trauma and underlying damage. In uncomplicated cases of nasal fracture where there has been no change in the position of the nasal and septal bones and the cartilage remains intact, close followup and rest during healing is suggested.  However, in more complicated cases where a broken nose needs to be repositioned, a few time dependent options exist.  If the time lapsed between the trauma and your initial visit to the doctor is less than two weeks (one week for children) then your nose may be repositioned using a quick and minimally invasive procedure called closed nasal reduction.  This procedure can be done under mild sedation or local anesthesia and has very little recovery time.  If more than two weeks have passed since your trauma it may be necessary to perform surgery to correct both the cosmetic effects of the broken nose as well as the functional breathing issues that may have arisen.  This surgery is an outpatient procedure and the recovery time is usually one week.

Figure 5: Before (left) and after (right) repair of nasal fracture via a minimally invasive procedure called closed nasal reduction. This patient was able to have his fracture repaired one week after trauma. 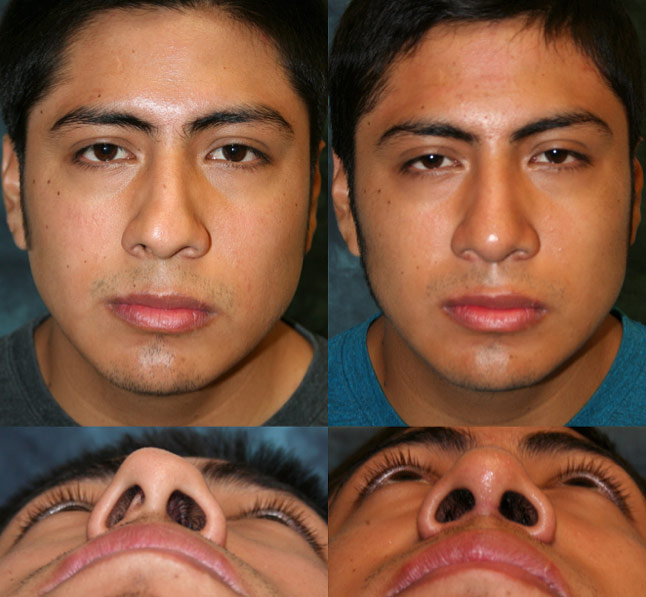 Figure 6: Images of a patient with fracture of the nasal bones and deviation of the septum (left). This patient underwent surgical correction of his nasal and septal fractures (right).

Request or schedule your appointment date online by filling out the appointment scheduling request form below and you will be contacted within 48 hours to confirm your date.   *indicates mandatory fields   Note: Do not use this form for an emergency!